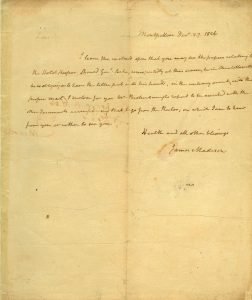 “Dear Sir, I leave the enclosed open that you may see the papers relating to the Hotel Keepers.  Should General Locke, unexpectedly at this season, be in Charlottesville, be so obliging as to have the letter put into his hands; in the contrary event, into the proper mail.  I enclose for you Mr. Brokenborough’s report to be ascribed with the other documents accompanying that to go from this rector; on which I am to hear from you or rather to see you.  Health and all other blessings, James Madison”.