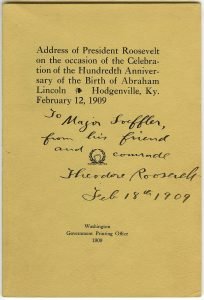 ROOSEVELT, THEODORE (1858-1919).  President of the United States.  Exceptionally scarce printed booklet by the Government Printing Office entitled: Address of President Roosevelt on the occasion of the Celebration of the Hundreth Anniversary of the Birth of Abraham Lincoln – Hodgenville, Ky.  February 12, 1909.  22 pages, octavo.  Housed in a custom ¾ length dark blue-green leather folding slipcase.  Boldly inscribed, as President,  on the front cover by Roosevelt.  He pens:

Major Charles Loeffler was a veteran of the Civil War and the conflicts with American Indian tribes in the West. He served as White House head doorkeeper from the days of Ulysses S. Grant thorough the administration of Theodore Roosevelt.  Outstanding association in the form of a tribute from TR as a sitting president, to Lincoln.  This is the only copy of this book we can recall seeing offered inscribed and signed in our decades of handling the best Presidential inscribed material.