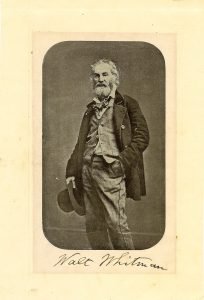 WHITMAN, WALT.   (1819-1892)   American poet, essayist, journalist and humanist.  Uncommon Printed Lino-type copy-image of a 5 ¾” x 3 ¼” photograph of Whitman, on a 8 ¼” x 5 ½” sheet, boldly Signed in dark ink: “Walt Whitman.” Fold in left blank margin and mounting traces on the verso from prior framing, however the image is in very good condition,  with a dark and clear signature of Whitman.   The Library of Congress dates this piece to circa 1849/1850.   While signed albumin photographs of Whitman can be found, these are usually removed from the 1876 limited edition of “Two Rivulets”, which came with a signed photograph tipped on to one of the early pages.   This image, signed, is a far greater rarity, and bigger.