CHURCHILL, SIR WINSTON S.  (1874-1965).  British politician and Prime Minister of the United Kingdom (1940-1945, 1951-1955).  Exceedingly-rare Promotional card-board cut-out photo-image, issued by: “The Association of Conservative Clubs, Ltd.” for the year 1950, boldly Signed by him: “Winston S. Churchill”, in ink, under his image.   Small calendar attached at lower left.  Overall size is approximately 9 x 6 inches.   Churchill is depicted on horseback, intently riding forward, eyes towards the viewer.  One the image, beneath the wording “Leading the Field”, Churchill has boldly signed his name.  Due to the extremely fragile nature of these promotional items, they are rarely encountered whole, and in one piece.  The fact that this one is signed by Churchill only multiplies that rarity factor!  Simply superb! 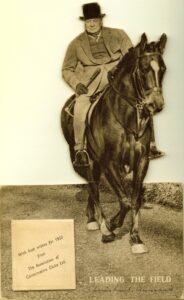