AMERICA AND THE WORLD WAR

PUBLISHED IN 1915, BEFORE THE UNITED STATES ENTERED THE CONFLICT OF WORLD WAR I

ROOSEVELT, THEODORE.  (1858-1919) 26th President of the United States; Vice President; Colonel of the Rough Riders at the Battle of San Juan Hill; recipient of the Nobel Peace Prize.   His book:  America and the World War.  Imprinted tan cloth covers.  New York, Charles Scribner’s Sons, 1915.   First edition.  Boldly signed by him on the front endpaper, with his signature measuring over 4 inches!  In this book from Roosevelt’s extensive canon of writings, TR examines the causes of the European war, and how to strive for a peaceful solution to it.  He also muses on a possible US involvement, and cautiously, yet strenuously urges intervention and preparedness on part of the United States.  First published well before US action, in 1915, this scarce title is rarely found signed by him.  A remarkable testament to the scope and understanding that Roosevelt had for world events. 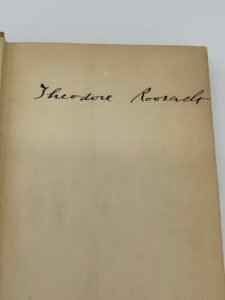