THE “LIBERATOR OF ARGENTINA, CHILE AND PERU”

SAN MARTÍN, JOSÉ DE.  (1778-1850).  Argentine General, known as the “Liberator of Argentina, Chile and Peru”; one of the principal leaders of the independence movement in South America from the Spanish Empire in the 19th Century;  served as the Protector of Peru. Scarce Manuscript Letter Signed, “José de San Martín”, in Spanish.  One page, quarto.  Santiago, Chile, June 26, 1817.  Writing after his triumphal defeat of the Spanish at the battle of Chacabuco, San Martin orders the reassignment of the 3rd battalion.  Very fine condition. 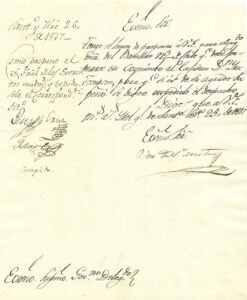