RONALD REAGAN SPEAKS OF HIS “EUREKA DAYS OF RESPECTABLE POVERTY”:  “(ONLY WE DIDN’T KNOW WE WERE POOR THEN ~ THE GOV’T HADN’T TOLD US)”

“Dear Ruth, It was wonderful to hear from you and I’m especially grateful for your kind and generous words.  Living up to them will be quite a job.  Those Eureka days of respectable poverty (only we didn’t know we were poor then—the gov’t hadn’t told us) seem far away in more than years.  I’m sorry to say that when you are here in Calif. I’ll be back in the mountain states at a Governors Conference.  I hope our paths will cross in the not too distant future, though.  Again thanks and best regards, Dutch”.

Regan had an unusual habit in writing letters.  He would often take a legal size pad of paper and hand write out his replies to various correspondents.  He would the sign it using whatever familiarity ‘name’ his correspondent knew him by.  Sometimes this was “Ron”, or “R.R.”, or in full “Ronald Reagan”, or as in this case his high school nick name of: “Dutch”.  His secretary would then take the legal pad of letters, and type them out on whatever stationery was to be used!  Thereafter returning the letter to Reagan to either authentically sign, or to which she would then add an autopen signature!!  This letter is one of the drafts that Reagan wrote out, and the content is all:  ”Reganesque”. 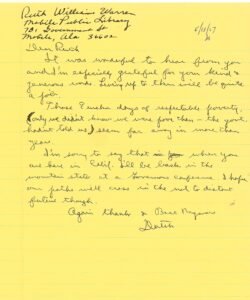