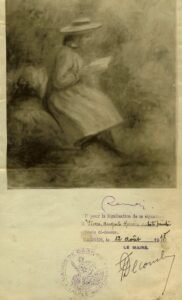 RENOIR, PIERRE-AUGUSTE. (1841-1919)    French artist and a leader in the development of the Impressionist style.  Charming black and white Photograph Signed, “Renoir,” of his painting depicting a young girl wearing a broad-brimmed hat and school girl dress, seated and reading a book.    The photo measures approximately 6 1/2 x 10 inches, and is mounted to a larger supporting back piece.   Photographs like these, were produced by Renoir’s art dealer, AMBROSE VOLLARD, to document the authenticity of the works produced by artists whom he represented.    Each painting was photographed and then the artist, in this case, Renoir would then sign the image and have his signature witnessed by the mayor of Cagnes.  This one reads:  “Seen in order to authenticate the signature of Pierre Auguste Renoir, artist painter, witnessed Cagnes 12 August, 1918”.  Under and to the left of this authentication the Mayor has affixed his official  seal of office, and signed his name.   There is some damage to the upper portion of the photograph as seen.  However, should one wish to mat and frame around this, and ‘hide’ the damage, the item would display wonderfully.  Insiders knowledge tip: many framed images/items like this, are framed exactly for that reason [but the sellers won’t tell you that…but we do!].   While we have seen and also sold several of these photographs signed by Renoir, very few of them are of people, and most don’t have the charm of this depiction of a young girl reading her book. 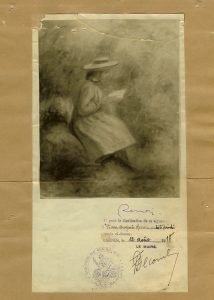