“Whereas upon the humble application of Lieutenant Colonel John Blackader of Our Regiment of Foot commanded by Brigad. Preston, to resign his commission in the said regiment to the Lord Forrester of the Earl of Stairs’s Regiment, it is represented to Us, that the said Resignation is agreeable to the Regulations we have thought fit to make in this behalf relating to Our Forces, We do in consideration of Lt. Col. Blackader’s great age, and his long and faithful service, hereby signify Our approbation thereof, and declare Our Will and Pleasure that a commission be made out for the Lord Forrester to be Lieut. Colonel of Brigad. Preston’s Regiment in the room of Lieut. Colonel Blackader accordingly.  This Our Sign Manual being first ended with the Treasurer of Our Royal Hospitall [sic] at Chelsea.  Given at Our Court at Windsor this 8th day of October 1711 in the 10th year of Our Reign.  By her Majesty’s Command, G. Granville”.

Queen Anne ruled Great Britain for 12 years, the last of the Stuarts.  The second daughter of James II, she remained Protestant though her father converted to Roman Catholicism in 1672.  When James was overthrown in 1688 due to his religious conversion, Anne’s older sister, Mary, and Mary’s husband, William of Orange, took the throne.  After William’s death in 1702, Anne assumed her duty as sovereign, uniting the kingdoms of England and Scotland in 1707.  When the queen died in 1714, she had no heir and was therefore succeeded by her German cousin, George, Elector of Hannover, thus ending the Stuart line. 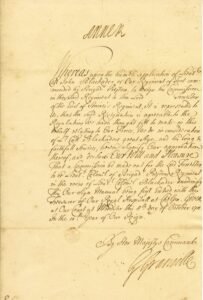