JAMES BUCHANAN, THE POLITICAL BOSS, ADVISES: “THE DELEGATES FROM PENNSYLVANIA, IF PRACTICAL, SHOULD BE UNITED IN ALL THEIR MOVEMENTS.”

“My dear Sir I have received from Lancaster two or three hundred copies of my first reply to Mr. Davis, in German. [Pennsylvania at this time had a very large German speaking population]. If Mr. Myers would write to me & thinks it necessary I would send him fifteen or twenty. I gave two of them to Mr. Wadsworth of Louisiana for you. From your friend   James Buchanan.

P.S. I think your determination is the proper one fairly & in good faith to obey your instruction & support Col. Johnston & if he cannot be nominated, then to go for Col. King in a Body. The Delegates from Pennsylvania, if practical, should be united in all their movements.” 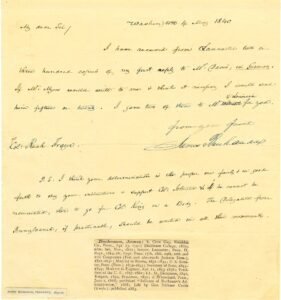