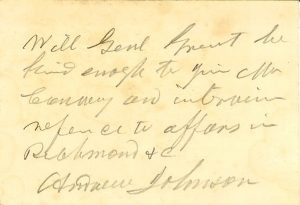 “Will General Grant be kind enough to give Mr. Canney an interview referring to affairs in Richmond, etc.  Andrew Johnson”.

Johnson and Grant had a unique history.  After the Civil War, Grant was made General of the Army, a post previously held only by George Washington.  Because Grant’s sole superior was President Johnson, the two became close colleagues and friends for a time.  In 1867, Johnson appointed Grant Secretary of War after suspending Stanton, but Grant resigned the post when the Senate wouldn’t concur in the suspension.  Johnson accused Grant of breaking his promise to support him, and the two were distant from that day forward.  They were so estranged that when Grant was inaugurated in 1869, he refused to ride in the same carriage as Johnson.  In our many years of experience, we have found Johnson autograph letters, written while President, to be almost nonexistent and much rarer than Garfield’s and Taylor’s.  Thomas Madigan, an early dealer of autographs in New York City, noted in his premier catalogue issued in 1911,  that Johnson was “the scarcest of the Presidents in A.L.S.”  Thus, the above is a remarkable opportunity to acquire a  true presidential rarity, with the choicest of associations — Johnson to Grant!