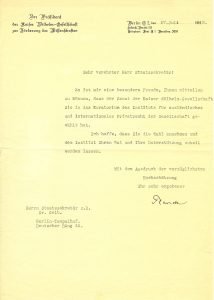 MAX PLANCK:  “I HOPE THAT YOU ACCEPT THE POSITION”

”It is my great pleasure to inform you that the Senate of the Kaiser Wilhehn Company has chosen you for the Board of Trustees of the Institute for foreign and international private law society.  I hope that you accept the position and can be given to your advice and your support for the Institute.   Planck.”