“I AM BOOKED ALL OVER RUSSIA, SWEDEN, FRANCE AND AUSTRIA AND WILL BE OVER HERE AT LEAST THREE YEARS MORE.”

“My Dear Seymour, Your letter just reached me, it having followed me around, and in answer to it would say that had you written me at least 3 weeks earlier I would have been more than pleased to have had you with me, but I have made all arrangements to stay [with] this Circus, for best part of summer, and they have to furnish me with two men, so you see that I have no trouble at all about that score.  I have engaged a German that speaks French and Russian, and he is to join me after the summer season.  Otherwise I would have certainly have tried to come to terms with you.  I will have 10 days open next month, and may take a run over and speak to you never the less [sic].  I am booked all over Russia, Sweden, France and Austria and will be over here at least three years more.  Remember me to all, with kindest regards I remain sincerely yours, Harry Houdini.  [P.S.]  Until June 30 Corty-Althoff Circus Dortmund Germany.”

Born Ehrich Weiss in Budapest, Hungary, Houdini took his professional surname from that of the French magician Jean Eugène Robert-Houdin.  He began his career in 1882 as a trapeze performer.  Subsequently he became world famous for his performances of feats of magic and his astounding ability in extricating himself from handcuffs, ropes, locked trunks, and bonds of any sort. In 1899, Houdini’s act caught the attention of Martin Beck, an entertainment manager who booked him at some of the best vaudeville venues in the USA, followed by a tour of Europe, to which our letter and it’s amazing letterhead directly relate and reference the very feats Houdini would do in involving the local police, who would strip search him, place him in shackles and lock him in their jails!  The show was a huge sensation, and he soon became the highest-paid performer in American vaudeville.

The above letterhead is extremely rare,  and we have seen it only once in our years in this business.  Coupled with the fact this letter  is written from a period where Houdini was at the beginning of his great world-wide fame, this letter would make a superb example for display, or addition to the collection any serious magic collector!  One of our: “The Best of the Best.”™  Very fine condition. 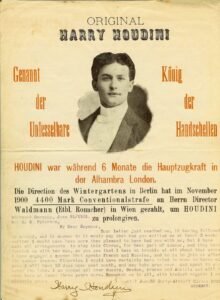 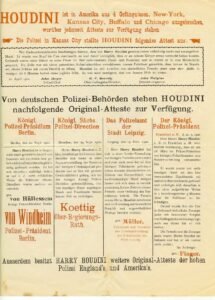