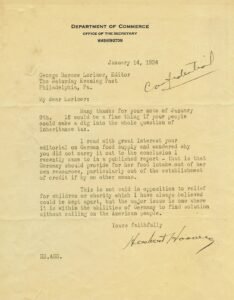 HERBERT HOOVER, AS COMMERCE SECRETARY,  TO THE SATURDAY EVENING POST EDITOR ON INHERITANCE TAXES AND THE AFTERMATH OF WORLD WAR I, AND THE ABILITY OF GERMANY TO FEED ITSELF

“Many thanks for your note of January 9th. It would be a fine thing if your people could make a dig into the whole question of inheritance tax.  I read with great interest your editorial on German food supply and wondered why you did not carry it out to the conclusion. I recently came to in a published report – that is that Germany should provide for her food intake out of her own resources, particularly out of the establishment of credit if by no other means. This is not said in opposition to relief for children or charity which I have always believed could be kept apart, but the major issue is one where it is within the abilities of Germany to find solution without calling on the American people. Yours faithfully, Herbert Hoover.”

Remarkable content, with his observation as relevant then, as they are to today’s global conflicts.