“My Lord,  Your Lordship will have observed that Her Majesty has by order in Council directed that Parliament should be prorogued till the 3rd of February then to meet for the dispatch of Business. It is probable that subjects of great Importance will be submitted for the consideration of Parliament at an early period, and I subscribe to suggest to Your Lordship the expediency that such measures should be considered in the House of Lords well attended by its Members, and that your Lordship should give your attendance at as early a period as may suit your convenience. I have the honor to be My Lord / Your Lordship most obedient humble servant, Wellington.”

Lord De La Warr served as Lord Chamberlain of the Household under Sir Robert Peel, Prime Minister, between 1841 and 1846. 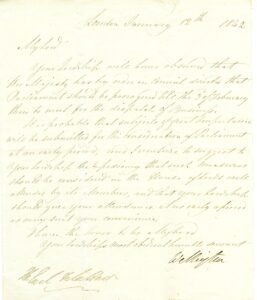