IN THE PUBLISHER’S PRESENTATION BINDING OF FULL POLISHED CALF

His book:  The Old Curiosity Shop. London: [Bradbury and Evans for] Chapman and Hall, 1841.  Quired in 6s (251 x 167 mm). Dedication leaf to Samuel Rogers (not called for by Smith, but that in vol.1 of Master Humphrey’s Clock from which this is separately issued). Illustrations in text by George Cattermole and Hablot K. Browne [“Phiz”]. Gilt-ruled on covers, gilt-decorated on spine, deep green/black and red morocco lettering pieces, all edges gilt, ink stamp of Chapman and Hall on front free endpaper and of the binder Hayday on rear free endpaper. Housed in a vintage custom full leather embossed slip case, of excellent quality.

BOLDLY INSCRIBED TO:  “WALTER SAVAGE LANDOR – FROM HIS HEARTY FRIEND, CHARLES DICKENS”, ON THE TITLE PAGE.

This presentation is one of extraordinary associations, one made even more so when one considers  Landor (1775 – 1864)  was 37 years Dickens senior, and then further inscribed by Landor to his son, opposite the title page, “Arnold Savage Landor / from Babbo” [a family nickname].

Landor was an immediate admirer of Dickens’ works.  In April 1839, before Dickens was introduced to Landor by John Forster, [both Landor’s and Dickens’ biographer, literary advisor and inner circle friend], Landor wrote to Forster, “Tell Dickens he has drawn from me more tears and more smiles than are remaining to me for all the rest of the world, real or ideal.”

Dickens and Landor first met in January 1840, through Forster, at Lady Blessington’s “literary salon.”  On February 10, 1840, Landor wrote to his friend G.P.R. James: “In town I made a new acquaintance — is a really popular, and what is much better, truly extraordinary man – the author of Nicholas Nickleby.  He comes on Saturday to spend a few days with me at Bath, and on Monday I have invited my elite of beauty (the Paynters) to meet him – How I wish you could too! …Dickens is really a good as well as a delightful man.  It is rarely that two such persons meet, as you and he – nor in any other society could I easily be the least of three.”

In 1869, a year before his death, Dickens wrote to Forster: “Landor’s ghost goes along the silent streets before me.” Forster wrote it was the first meeting in Bath on February 7, 1840, that there came into the novelist’s mind the first stirrings of imagination that eventually took form as ‘Little Nell’ who became to Landor as one who had really lived and died.”  Dickens on May 9, 1869, in a letter to Forster, confirmed what Landor had often previously told friends that it was at Landor’s lodgings in Bath that Dickens first thought of Nell.  Landor later declared that he had “never in his life regretted anything so much as having failed to buy the house and burn it to the ground, so that no meaner association should ever desecrate the birthplace of Nell.”  It was during this first trip that Rose Paynter, Landor’s “elite of beauty” and best friend in Bath, introduced Dickens to the original of Quilp in ‘The Old Curiosity Shop’, a frightful little dwarf named Prior, who “let donkeys on hire and used a heavy stick impartially on his wife and donkeys.”

On February 11, 1841, Dickens asked Landor to be his newly born fourth child’s godfather, which incredibly excited and honored Landor.  The Christening took place on December 4, 1841, eleven days before the first separate publication of ‘The Old Curiosity Shop’.

Landor’s life is a story in its own right.  It is an amazing catalogue of incidents and misfortunes, many of them self-inflicted, but some of no fault of his own.  His headstrong nature and hot-headed temperament, combined with a complete contempt for authority, landed him in a great deal of trouble over the years.  Landor’s writing often landed him on the wrong side of the laws of libel.  Many times his friends, including Dickens and Forster, had to come to his aid in smoothing the ruffled feathers of his opponents or in encouraging him to moderate his behavior.  His friends were equally active in the desperate attempt to get his work published, where he offended or felt cheated by a succession of publishers who found his work either unsellable or unpublishable.  He was repeatedly involved in legal disputes with his neighbors and Dickens’ characterization of him as Lawrence Boythorn in Bleak House (1852-3) revolves around such a dispute over a gate between Boythorn and Sir Leicester Dedlock.  His stormy marriage with his long-suffering wife resulted in a long separation (she and his family lived in Florence) and when she finally decided to take him back, he tried to escape several times, only to be brought or coaxed back.

Yet, Landor was described as the kindest and gentlest of men.  He collected a coterie of friends who went to great lengths to help him as “his loyalty and liberality of heart were as inexhaustible as his bounty and beneficence of hand.”  Modern day biographers of Dickens concluded that Landor’s aggressive talk was a cover for an extremely sensitive, sentimental and generous character, who was exceptionally loyal to his friends.

Simply superb and with associations of the highest order!  One of our “Best of the Best”.™ 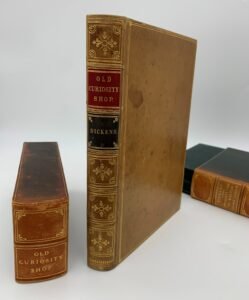