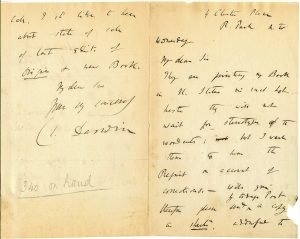 DARWIN DIRECTS THAT HARVARD PROFESSOR ASA GRAY
IS TO RECEIVE UNBOUND SHEETS OF HIS
THE ORIGIN OF SPECIES
TO FURTHER ENABLE THE PUBLICATION OF HIS WORK IN THE UNITED STATES!

“My dear Sir.  They are printing my book in the U[nited] States in real hot haste. They will not wait for stereotypes of the woodcuts; but I want them to have the Reprint on account of corrections. Will you therefore please send by today’s post a copy in sheets, addressed to: Prof[essor] Asa Gray / Cambridge / Massachusetts, U[nited] States.  See the postage correctly paid.  Many thanks for several parcels and letters presented to me.  I will call today or soon to speak about the little Book “from Darwin” when I can.  I’d like to hear about state of each of last editions of Origin and new book.  My dear sir, yours very sincerely, Ch. Darwin”

Under Darwin’s bold signature the recipient, or someone else has written, in pencil, “340 on hand”, probably referring to the # of copies left at the publishers.

In the United States, Asa Gray negotiated with a Boston publisher for publication of an authorized American version, but learnt that two New York publishing firms were already planning to exploit the absence of international copyright to print Origin..  Darwin was delighted by the popularity of the book, and asked Gray to keep any profits. Gray managed to negotiate a 5% royalty with Appleton’s of New York, who got their edition out in mid January 1860, and the other two withdrew. In a May letter, Darwin mentions a print run of 2,500 copies, but it is not clear if this referred to the first printing only, as there were four press runs that year.  Simply, a very important letter of Darwin,  where he references by name The Origin of Species  [and not inference], along with all the content, choice associations, and ‘magic’ words that one could desire in a Darwin letter!  One of our: “The Best of the Best.”™