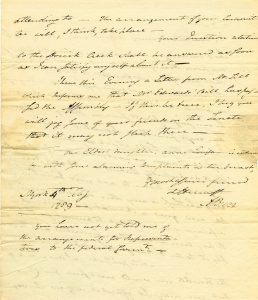 “YOU HAVE NOT YET TOLD ME OF THE ARRANGEMENTS FOR REPRESENTATIVES TO THE FEDERAL GOVERNMENT.”

“I have this evening received your letter of the 30th.  I am enclosing a memorandum of securities taken by you from Henry Wendell—the amount of the debt due from Mr. Wendell is ₤219.16—so that the securities are not quite sufficient—they ought in fact to exceed the amount of the debt.  Perhaps he can pay a small sum in money—if you can raise from these securities or from Mr. Wendell the ₤150 which you wrote me about in such season as will serve your purpose, I shall be perfectly content.  At any rate as I gave you leave to act your discretion, you may take those or any other securities you see proper, and give a receipt for them, (not in displays of the debt) but to account for the money to be received upon these securities and to apply it to the discharge of their debt.  As to politics, I was aware of the trouble you would meet from Gen. C[linton?]. but you may be assured it is of no consequence and will not make any division worth attending attending [sic] to.  The arrangement of your committee will, I think, take place.  Your question relative to the Horick Creek shall be answered as soon as I can satisfy myself about it.  I have this evening a letter from Mr. Lill which informs me that Mr. Edwards’ bill has passed the assembly—if this be true, I beg you will jog some of your friends in the Senate, that it may not sleep there.  Our eldest daughter, Anne is extremely [sick], with some alarming complaints in the breast.  Your most assured friend, A. Burr”.  [P.S.] You have not yet told me of the arrangements for representatives to the federal government.”

Aaron Burr, the son of the second president of Princeton, and grandson of Jonathan Edwards, was born in 1756, and studied law before the Revolutionary War led him to abandon his studies and enlist as a volunteer in 1775. Serving under various commanders, Burr attained the rank of Lieutenant Colonel before health issues forced his resignation from the service. A year later, in 1780, Burr resumed his legal study, and married the widow of a British officer, Mrs. Theodosia Bartow Prevost. Burr, along with his new wife and her children, relocated to New York in 1783, where he established a thriving legal practice with the man who would one day become his greatest political enemy, Alexander Hamilton. An accomplished attorney, it was not long before Burr turned his eyes towards a politic position. After his defeat in a campaign for a legislative seat in 1788, Burr, a moderate anti-Federalist, joined with a group of moderate Federalists, many of whom were his close friends, to challenge former General Clinton (a vocal opponent of the Constitution) now serving as governor of New York. Exactly one week after writing this letter, Burr was counted among the individuals who met surreptitiously to strategize Clinton’s defeat. Though Clinton won the election his margin of victory was minuscule, and his Federalist opponents were able to gain a majority in both New York houses. This near defeat (orchestrated in part by the highly intelligent and politically savvy Burr) impressed the governor, who appointed the young lawyer as New York’s Attorney General in September of 1789. This appointment would eventually lead Burr to the Vice-Presidency and then, on a summer day 1804, to Weehawken for his fateful duel with his former legal partner, Alexander Hamilton. Aside from his budding political aspirations, this letter also makes note of one of Burr’s stepchildren, Anna Louisa. Theodosia’s children from here first marriage have long been a mystery to biographers of Burr, whose personal account of his life, if one ever existed, has been lost to history. The study of revisions to Burr’s will have convinced historians that Theodosia’s daughters died before their mother (she died twelve years into the marriage in 1894) but the facts surrounding their deaths remain shadowed in mystery (Schachner, Aaron Burr: A Biography). The extreme sickness of Anne that Burr notes (personal commentary like this is rare in Burr’s letters of this period) is in all likelihood the fatal illness that took his eldest stepdaughter’s life. A unique letter from the early years of Burr’s political career that offers a rare glimpse into the personal life of one of America’s most enigmatic figures.