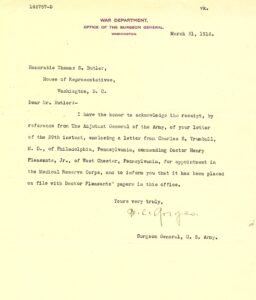 DR. WILLIAM GORGAS — THE PHYSICIAN WHOSE WORK IN CONTROLLING MALARIA AND YELLOW FEVER MADE CONSTRUCTION OF THE PANAMA CANAL POSSIBLE

GORGAS, WILLIAM C. (1854-1920) Army physician and Surgeon General of the United States Army; best known for his work combating the transmission of yellow fever and malaria by controlling the mosquitoes that carry them; his strategy was greeted with considerable skepticism and opposition to such hygiene measures; the measures he put into practice as the head of the Panama Canal Zone Sanitation Commission saved thousands of lives and contributed to the success of the Canal’s construction. Surprisingly uncommon Typed Letter Signed, “W.C. Gorgas,” on War Department, Office of the Surgeon General letterhead. One page, quarto. Washington March 31, 1916.  Very fine condition.  Gorgas writes to: “Honorable Thomas S. Butler, House of Representatives, Washington, D.C.”:

“Dear Mr. Butler – I have the honor to acknowledge the receipt, by reference from the Adjutant General of the Army, of your letter of the 29th instant, enclosing a letter from Charles S. Trumbull, M.D., of Philadelphia, commending Doctor Henry Pleasants, Jr., of West Chester, Pennsylvania, for appointment in the Medical reserve Corps, and to inform you that it has been placed on file with Doctor Pleasants’ paper in this office. Yours very truly, W.C. Gorgas  /  Surgeon General, U.S. Army.”

This letter is accompanied by a copy of the letter of Charles Trumbull sent in support of Dr. Pleasants.  As previously stated, Gorgas letters are rather uncommon.  A fine addition to any collection of science or medicine.