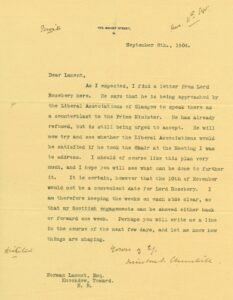 EARLY IN HIS POLITICAL CAREER WINSTON CHURCHILL REPORTS:  “[LORD ROSEBERY] IS BEING APPROACHED BY THE LIBERAL ASSOCIATIONS OF GLASGOW TO SPEAK THERE AS A COUNTERBLAST TO [BALFOUR] THE PRIME MINISTER.”

“Dear Lamont, as I expected, I find a letter from Lord Rosebery here.  He says that he is being approached by the Liberal Associations of Glasgow to speak there as a counterblast to the Prime Minister.  He has already refused, but is still being urged to accept.  He will now try and see whether the Liberal Associations would be satisfied if he took the Chair at the Meeting I was to address.  I should of course like this plan very much, and I hope you will see what can be done to further it.  It is certain, however that the 10th of November would not be a convenient date for Lord Rosebery.  I am therefore keeping the weeks on each side clear, so that my Scottish engagements can be shoved either back or forward one week.  Perhaps you will write me a line in the course of the next few days, and let me know how things are shaping.  Yours very truly, Winston S. Churchill.”

In 1904, Winston Churchill’s dissatisfaction with the Conservative party grew so strong that, following the Whitsun recess, he crossed the floor of The House of Commons to sit as a member of the Liberal Party. As a Liberal, Churchill remained vociferous opponent of Prime Minister Balfour, and a strong supporter of free trade and social reform, the causes that initially inspired his political shift. While pursuing his early political ambitions, Churchill was simultaneously at work on a biography of his father, Lord Randolph Churchill (1906). When the work appeared, reviewers praised it as a literary tour-de-force, marking the start of a literary career that would culminate with Churchill’s acceptance of the 1953 Nobel Prize. Also at work on a biography of Churchill’s father was Archibald Philip Primrose, 5th Earl of Rosebery [(1847-1829), British Liberal statesman, Prime Minister (1894-1895)]. When our letter was written, Primrose had moved away from the mainstream of the Liberal party, having supported the Boer War and opposed Irish Home Rule. Due to this political shift, Primrose, unlike Churchill, found himself kept from participating in the Liberal government that came to power following the General Election of 1905. An interesting early letter relative to Churchill’s political maturation, and the changing political milieu of England in the early twentieth-century.