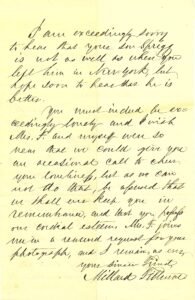 MILLARD FILLMORE EXPRESSING A DEPTH OF PERSONAL REFLECTION TO THE WIDOW CARROLL IN HER LONELINESS: “I NOW TAKE GREAT PLEASURE IN SENDING… [PHOTOGRAPHS OF THE FILLMORE FAMILY, NOTING THE ONE] OF MY DEAR DAUGHTER, [MARY ABIGAIL] TAKEN FROM A PAINTING SINCE HER DEATH.”

FILLMORE, MILLARD. (1800-74). Thirteenth President of the United States.  Revealing Autograph Letter Signed, “Millard Fillmore”. Two full pages, octavo.  Buffalo, Sept. 8, 1864. To Mrs. William T. Carroll, recent widow of William T. Carroll, grandnephew of Signer of the Declaration of Independence, Charles Carroll of Carrolton. Carroll had died the previous year after serving 35 years as Clerk of the U.S. Supreme Court. Fillmore references their son and heroic Civil War officer, SAMUEL SPRIGG CARROLL (1832-1893), who saw action at Fredericksburg, Chancellorsville, Gettysburg and the Battle of the Wilderness. In the letter, Fillmore expresses his sorrow for “Sprigg” who had been wounded May 12, 1864 at Spotsylvania Court House. That same day, Carroll was promoted to Brigadier General. Very fine condition. Fillmore writes:

“Your very acceptable and kind favor of the 5th came to hand this morning, and I was greatly surprised to hear that you had not received Mrs. Fillmore’s photograph, but I now recollect that her modesty prevented her from sending it, and she hoped to get yours by sending mine. I now take great pleasure in sending hers and also one of my son, and of my dear daughter, taken from a painting since her death. Your may remember them both. I am exceedingly sorry to hear that your son [Samuel] Sprigg is not as well as when you left him in New York, but hope soon to hear that he is better. You must indeed be exceedingly lonely and I wish Mrs. F. and myself were so near that we could give you an occasional call to cheer your loneliness, but as we can not do that, be assured that we shall ever keep you in remembrance, and that you possess our cordial esteem, Mrs. F. joins me in a renewed request for your photograph, and I remain, as ever, Your sincere Friend, Millard Fillmore”

Fillmore’s first wife, Abigail, died less than four weeks after he had retired from the Presidency, sadly catching a severe cold at the Inaugural Address of incoming President Pierce. She had been sick much of his presidency. His daughter from this marriage, Mary Abigail, was the White House Hostess from 1850 to 1853 due to her mother’s illness. She died one year after her mother during an epidemic of cholera. Content like this is not often encountered.  Fillmore’s kind letter in expressing his sorrow at Mrs. Carroll’s loneliness, and thus reflecting his own, in wanting to share such a poignant photograph provides an empathic insight to the much forgotten president.