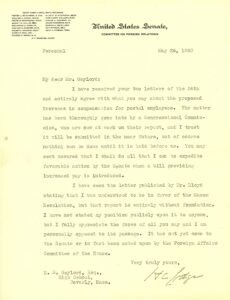 HENRY CABOT LODGE WRITES ABOUT A BILL COMING BEFORE CONGRESS FOR:  “THE PROPOSED INCREASE IN COMPENSATION FOR POSTAL EMPLOYEES”

“My Dear Mr. Gaylord: I have received your two letters of the 24th and entirely agree with what you say about the proposed increase in compensation for postal employees. The matter has been thoroughly gone into by a Congressional Commission, who are now at work on their report, and I trust it will be submitted in the near future, but of course nothing can be done until it is laid before us. You may rest assured that I shall do all that I can to expedite favorable action by the Senate when a bill providing increased pay is introduced. I have seen the letter published by Mr. Lloyd stating that I was understood to be in favor of the Mason Resolution, but that report is entirely without foundation. I have not stated my position publicly upon it to anyone, but I fully appreciate the force of all you say and I am personally opposed to its passage, It has not yet come to the Senate or in fact been acted upon by the Foreign Affairs Committee of the House. Very truly yours, H.C. Lodge”