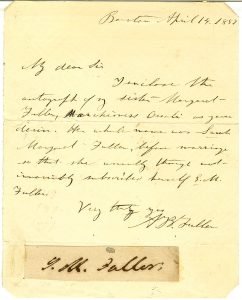 FULLER, SARAH MARGARET. (1810-1850)  Journalist, women’s rights activist; considered the most important woman in the Transcendentalist movement; her book ‘Woman in the Nineteenth Century‘ is considered the first major feminist work in the United States;  died at sea off Fire Island, NY in a ship wreck.   Her exceedingly-rare Signature, “S. M. Fuller”, affixed to a letter written by her brother,  the Rev. Arthur Buckminster Fuller.  He was a Unitarian minister in Boston; a chaplain in the Civil War;  and was killed at the battle of Fredericksburg in 1862.   One page, small octavo.    Boston, April 14, 1857.  Fuller writes, and sends his correspondent a clipped signature of his sister:

My dear sir, I enclose the autograph of my sister Margaret Fuller, Marchioness Ossoli as your desire. Her whole name was Sarah Margaret Fuller, before marriage so that she usually though not invariably subscribed herself S.M. Fuller. Very Truly yrs. A.B. Fuller.”

An exceptional item!  The combination of Fuller’s signature, on a letter from her brother, with the clarification of how she signed her name, makes this rare item, even that much more desirable.  A fine addition to any literary collection.