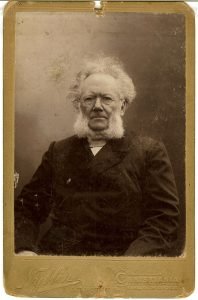 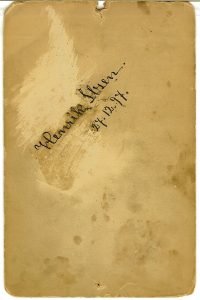 IBSEN, HENRIK.  (1828-1906)  Norwegian playwright, director, and poet;  Ibsen is viewed as one of the founders of Modernism in theater.  Rarely seen, Cabinet Photograph Signed, “Henrik Ibsen / 27.12.97” on the verso.   Ibsen is depicted in a half-length, full face bust pose, intensely looking forward with a piercing gaze.  Image by “Nyblin /  Eneberettiget 1896 / Christiania / Karl XII Gade.5.”, on their embossed photographic card stock.     We credit this photograph to Agnes Nyblin, [or her son, Daniel Georg Nyblin] by the dates involved. She married the photographer Karl Anton Peter Dyrendahl Nyblin and they created a studio in Bergen called “K. Nyblin”. Her husband died in 1894, but she continued the business successfully, and became part of a growing number of female pioneer Norwegian photographers.   Mounting traces and minor loss to edges [as seen] where image was once pinned[?] to a backing.   Signed imagery of Ibsen is quite rare, and we cannot recall seeing this image before, let alone signed by him.  Combine this with the Nyblin association, and the item is a great addition, in our opinion,  to any literature or photography collection.