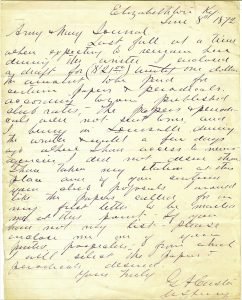 “Last fall at a time when expecting to remain here during the winter I enclosed a draft for ($21.00) twenty one dollars the amount to be paid for certain papers and periodicals according to your published club rates – The papers & periodicals were not sent to me, and I being in Louisville during the winter & until a few days ago when I have access to news agencies, I did not miss [?] them. I have taken my station at this place and if you continue your club proposals, I would like the papers called for in my first letter, to be mailed me at this point. If you have not my list, please enclose me one of your printed prospectus [?]  from which I will select the papers & periodicals desired. Yours truly G.A. Custer.”

While in Elizabethtown Kentucky, Custer and two detachments of the 7th Cavalry helped Federal marshals keep an eye on the activities of the Klu Klux Klan as well as a myriad of moonshiners who were active in the area.  As Custer references in this letter, original plans to remain in Kentucky during the prior winter to purchase additional horses for the U.S. Cavalry’s continued operations in the Dakota Territory had been altered unexpectedly. Instead, Custer accompanied General Sheridan and Russian Grand Duke Alexis in a buffalo hunt in Nebraska earlier in the 1872.  Shortly after returning to Elizabethtown, Custer and the 7th cavalry set out for the Dakota Territory with orders to protect a railroad survey party from the Lakota Indian tribe.  In August of 1873, the 7th U.S. Cavalry clashed for the first time with the Lakota, continuing the steady increase of tension between the United States and the indigenous tribes of North America.   A choice example for framing or display.