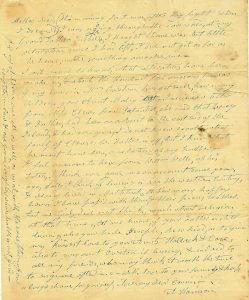 “I received your last communication in a newspaper, and thank you, but I wish you would write me a long letter and give me as much information respecting my old friends and acquaintances and their children, as you can, it would be very grateful to me.  Last week, we had a visit from a Mr. Reeve formally from the Island, I do not know, what family of the Reeves’s he was of, as I was not able to see him, he said, he had been a year or more, in this state, and as he was now, thinking of returning home, he thought he ought to come down here, before he went east, he made but a short stay, came here in the afternoon, and returned to the city that night, we would have been pleased, if he had stayed all night with us.  I could not see him, owing to a very severe fit of sickness that I had had, I was not able to see any company.  He saw my oldest daughter Betsey Short, who happened to be home, and a daughter in law, the widow of my son Benj., who lives with me, with her two sons.  I have also with me three of Dr. Thornton’s children, two little girls, and the infant, who was not a year old when his mother died.  (This morning for it was after day light when I dreamed) I was going through the door yard, at my grandfather Mitchell’s, I thought there were but little alteration since I had left, I did not get as far as the house, until something awoke me.  I wish much to know, what alterations have been made in, and about the house.  I feel anxious to hear if my cousin Mrs. Overton has got well, how many children your Aunt Molly left.  I received a letter from Miss Clews from Setauket, she said that Willy and father, had been on a visit to the east end of the Island, and had seen you, I do not know exactly what family of Clews her father is of, but I know that he must have been, a relation of my father.  I feel anxious to hear from William Wells, of his sister.  I think you gave me an account some years ago, Sally.  I think if living is in the western country, and Nancy lived in Mattituck, oh how many happy hours I have passed with them, and their pious brothers, but we girls, I did not think much about religion at that time, let me know, if your father is still living, also your uncle Joseph, be so kind, as to give my kindest love to your Aunt Hallack and care, also to your aunt Auston if living, and indeed to all my friends, who may think it worth the time to enquire after me.  With love to your family and keep a large share for yourself, to all my dear cousins, A. Harrison.  P.S. My children are all as well as usual, with the exception of one daughter in law and one granddaughter whose health is not good.”

Anna Harrison’s father, Judge John Cleves Symmes, owned much of the land in the Northwest Territory.  In 1794, Anna moved with her father and his third wife, Susanna, to North Bend, Ohio, a town established on the landholdings of Judege Symmes.  After Symmes’ death, Anna inherited the family farm in North Bend, where she lived with her husband, future President William Hnery Harrison, and her children for most of her life.   Her ten children, all born between 1796 and 1814, kept the Harrison’s busy and surprisingly, in debt.  Some died of alcoholism and others from various illnesses, with Anna outliving all her children but one.  Her autograph is rare, and is usually collected in free-frank form, as Anna was the first First Lady given the privilege of free-franking her letters.