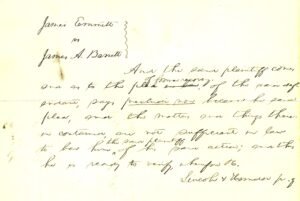 “And the said plaintiff comes and as to the plea of former recovery, of the said defendant, says preclude now because the said plea, and the matter over things therein contained, are not sufficient in law to bar him, the said plaintiff, of his said action; and this he is ready to verify, wherefore etc.  Lincoln and Herndon p.q.”

Richards’ statement reads: “The foregoing document is in the handwriting of Abraham Lincoln; it was written by him to be filed in the case of James Emmett vs. James A. Barrett, then pending in the Circuit Court of the United States for the Southern District of Illinois.  The above plea was never filed in the case but was found by me among the papers in the above-mentioned case and I obtained permission to withdraw it.  Mr. Lincoln prepared in his own handwriting also, another and more extensive defense which was filed in the case.  It afforded me very great pleasure to present the above original document to the Right Honorable D. Lloyd George with assurances of my high regard.  John S. Richards, author of Abraham Lincoln, the Lawyer-Statesman”.

Living in New Salem, Illinois, Abraham Lincoln was a popular member of society.  In 1832, he was Postmaster of the small town and Deputy Surveyor of Sangamon County.  Fascinated by politics, Lincoln read every newspaper that went through his office and decided two years later to run for representative of the state legislature to Illinois.  He had run for the same position in 1832 and lost, but found much support the second time; he was elected in 1834 and reelected for three more terms after that.  In 1836, Lincoln became Whig floor leader, replacing John T. Stuart, and began studying law between legislative sessions.  That same year, becoming a licensed attorney, Lincoln moved to Springfield to join Stuart’s law practice as a junior partner.  When that collaboration dissolved, Lincoln moved on to join with other firms, spending his time “riding the circuit”.  For three months every spring and fall, lawyers and judges would hold court at rural county seats.  Lincoln had the eighth circuit, the biggest in the state, encompassing 15 counties.  Well attended by townspeople, the circuits were an opportune place for Lincoln to further his political career. 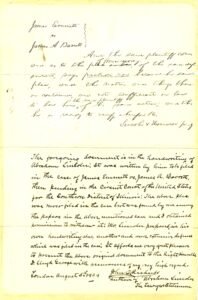