WORDSWORTH DEALS WITH HIS FINANCES

“My dear Sir I much regret I should have left home before the arrival of your obliging letter as you must have been disappointed in not receiving an earlier answer. May I beg that any future letter to which this business may give rise may be addressed to the stamp office Rydal in which case it will be instantly attended to by my clerk (during my absence) who is complete master of everything that concerns the office. If the securities be very doubtful it would be better not to pay upon them till the same are actually received, but if there be a likelihood of their recovery it would be best to pay upon them at once – in either case they should appear in the account. The return is made either to me or to my Sub  Dirc [?] Mr. Garnett of Penrith is in fact made to the Com[i]ss[inor] of the head Off[ice] London – the letter to which you allude is a form of the office. The duties may be paid either to Mr. Garnett or myself as most convenient. Be so kind as to say to Mrs. Hamilton with my best regards that at this distance from home I am unable to reply to her query but if she is anxious about it Mr. Peile [?] will be able at once to refer to the deed & give a satisfactory answer. I remain my dear sir, Your much obliged Wm. Wordsworth”.

A fine biographical letter, that gives the modern reader and scholar a glimpse into his financial affairs. 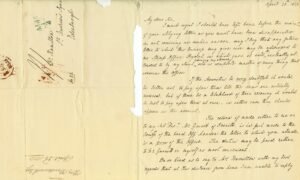