ONE OF THE LARGEST, TRULY ICONIC, WALTER STONEMAN IMAGES

CHURCHILL, WINSTON (1874-1965). Prime Minister of Great Britain. Magnificent vintage matte-finish 9 x 12 inch, Walter Stoneman photograph, affixed to the original 11.5 x 14.5 inch photographer’s mount, depicting Churchill in the cabinet war rooms, Signed in fountain pen, “Winston S. Churchill” across his lower image. [London, 1941].  Matted and framed to an overall size of 19.5 x 23.5 inches in a simple gilt wood frame. Also Signed by Walter Stoneman, the photographer, in pencil at the lower left corner of mat. Scattered silvering to dark areas of photograph as is usual, with a tiny tear at top right of mount [mentioned for accuracy], and a few small ‘water’ spots to bottom of mount, otherwise, very fine condition. Churchill’s signature remains bold and eye-catching on this uncommonly large photograph of the legendary statesman who is captured in all of his defiant air of war-time Prime Minister.

Stoneman arrived at 10 Downing Street on April 1, 1941,  to photograph Churchill. He realized by the buzz in the rooms, that this day was to witness a historic occasion.   He recorded the exact time he took the Prime Minister’s picture as 3pm.  At this moment, Churchill was waiting for word on Germany’s fateful invasion of Yugoslavia.  This image, along with one by Yousuf Karsh, also taken in 1941, remains the image of Churchill we know today.

This is an item for the corporate board room, or the individual who truly wants to possess “the” ultimate iconic Churchill image, in a size that is rarely encountered. 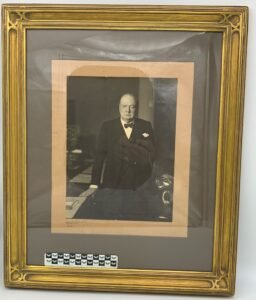