GENERAL U.S. GRANT SALUTES CYRUS W. FIELD ON THE ACCOMPLISHMENT OF THE SUCCESSFUL LAYING OF THE ATLANTIC CABLE

GRANT, ULYSSESS S. (1822-1885). Union General in the Civil War and President of the United States. Choice Autograph Letter Signed, as General, on Head Quarters Armies of the United States stationery. One full page, 4to. Washington, D.C., November 8, 1866. To “A.A. Low and Gentlemen of the Invitation Committee”.  Grant writes:

“Your kind invitation to me to meet Mr. C.W. Field at dinner on the 15th inst. to exchange congratulations on the success of the great enterprise which has engaged so much of his time for some years is received. It would afford me great pleasure to be able to accept but I fear other engagements will prevent. Allow me however to express my appreciation of the enterprise which Mr. Field has been engaged in and to congratulate him upon the success which finally was attained through his perseverance.”

Writing to Abiel Abbot Low, the president of the New York Chamber of Commerce, Ulysses Grant here declines an invitation to the group’s testimonial dinner for Cyrus W. Field, the promoter of the Atlantic Cable. Having just completed the first successful transatlantic cable, stretching from Valentia Island, Ireland, to Heart’s Content, Newfoundland, on July 27, 1866,  Cyrus Field, an honorary member of the New York Chamber of Commerce, was met by three hundred distinguished guests at the banquet. Subsequently, Field was involved in building New York’s first elevated railway. Unfortunately, serious business reverses led him to lose his fortune later in life. Just a very fine letter associating the names of Grant and Field, and marking what was the technological feat of its day!   Excellent condition. 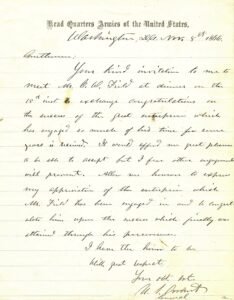