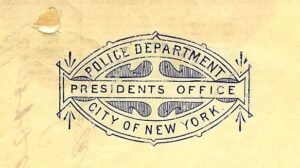 RARELY SEEN LETTER FROM THEODORE ROOSEVELT —  IN HIS CAPACITY AS N.Y.C POLICE COMMISSIONER

“My dear Mr. Stewart: Mr. David Healy is an applicant for the position of Secretary of your new Board.  Mr. Healy was an old colleague of mine in the Legislature, where I grew to have a very warm respect for him.  He has made a special study of these prison questions, and I think he would be a very valuable man for you to have.  I take pleasure in writing this because I have known him well for a long time.  Very sincerely yours, Theodore Roosevelt”.

Roosevelt served in this position for a few months (May 1895-early 1897), and any letters written on this letterhead, and in this capacity are quite rare. 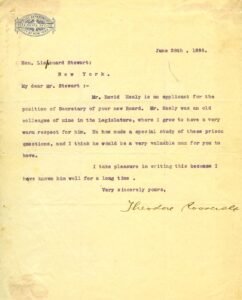