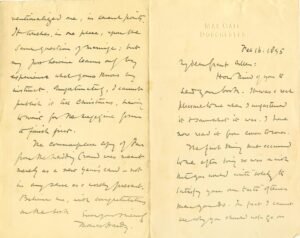 THOMAS HARDY ON HIS HEROINE … TESS OF THE D’URBERVILLES

“My dear Grant Allen:  How kind of you to send your book.  It was a real pleasure to me when I unfastened it and saw what it was.  I have now read it from cover to cover.  The first thing that occurred to me after doing so was a wish that you would write solely to satisfy your own taste oftener than you do.  In fact I cannot see why you should not go on pleasing yourself ad infinitum.  The woman is admirable at the beginning, but more, that is to say dear, further on, and right to the end.  At first I had a perverse feeling that I wouldn’t like her, but came round humbly.  The great stroke of the tragedy to my mind is the daughter’s revolt.  That was the indispensable 5th act—and I quite trembled when—during her childhood—I feared you might not take advantage of the splendid ending such a reversion to the old type would afford.  (I had not peeped, and it was curious to find how exactly you had anticipated my view.)  You must make up your mind to be condemned in some quarters, but you will be treated more leniently than I was for ‘Tess’.  We have moved on since then.  I wish I could send you the real copy of the story I have written for Harpers, as the form in which it is appearing there is a conventionalized one, in several points.  It touches, in one place, upon the same question of marriage; but my Tess heroine learns only by experience what yours knows by instinct.  Unfortunately, I cannot publish it this Christmas, having to wait for the magazine firm to finish first.  The commonplace copy of Far from the Maddening Crowd was meant merely as a New Year’s card—not in any share as a worthy present.  Believe me, with congratulations on the book, ever your friend, Thomas Hardy.”

In this letter Hardy acknowledges the receipt of fellow author Grant Allen’s (1848-1899) novel, The Woman Who Did (1895), perhaps his most famous work.  What’s fascinating is the comparison Hardy makes between the heroine of Grant’s novel and Tess from HARDY’S TESS OF THE D’URBERVILLES (1891).  The Woman Who Did is the story of a woman who refuses to marry her lover because she feels that the marriage laws are unfair to women.  Tess, on the other hand, is a victim of cruel fate and abused by her lover and then abandoned by her husband.  (www.chriswillis.freeserve.co.uk/grantallen.htm, Grant Allen Website)  Hardy astutely observes that while the heroines both come to the same conclusions about life and love, Grant’s heroine doesn’t have to live through the tragedy that Tess does to come to that knowledge.  When it was first published, Tess received much criticism from the public, which thought it immoral and depressing.  However, four years separate Allen’s novel from Tess, and Hardy assures Allen that he won’t have as much public censure for his work.  Hardy offers fascinating insight and commentary on a novel that hadn’t yet been published.  This is the finest content Hardy letter we have owned with commentary on his classic Tess of the D’Urbervilles.  Letters like this are nearly impossible to obtain. Take this opportunity to make it yours!   Just superb, and one of our “Best of the Best”  ™