CLEVELAND, GROVER. (1837-1908) 22nd and 24th President of the United States; elected President of the U.S. in 1884, the first Democrat to hold that office since the Civil War; his election was a protest against the waste and corruption that had characterized the Republican administrations after the war, and his personal integrity helped restore confidence in the government; he lost his re-election bid to Benjamin Harrison, and was then re-elected in 1892; the only President to be elected to twon nonconsecutive terms. ”THE PUBLIC PAPERS OF GROVER CLEVELAND, TWENTY-SECOND PRESIDENT OF THE UNITED STATES. MARCH 4, 1885, TO MARCH 4, 1889”. Signed and Inscribed by the President on the first blank end paper to: ”Mrs. Francis P. Kinnicutt / from / Grover Cleveland / May 17, 1890.” Washington: Government Printing Office, 1889. First Edition. Quarto (8″ x 11″) Bound in brown cloth, and marbled paper boards. Inner hinges strengthen with archival webbed cloth tape. Minor rubbing to the spine tips and corners, as expected on this heavy large format book. Francis ‘Frank’ Parker Kinnicutt, was an doctor. 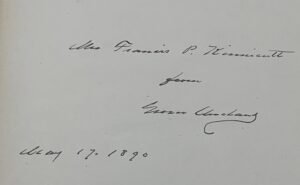