THE SHORT REIGN OF PIPPIN IV

STEINBECK, JOHN. (1902-1968).  American writer and Nobel laureate, who described in his work the struggle of people who depend on the land for their livelihood;  his most powerful novels, include: Of Mice and Men (1937);  The Grapes of Wrath (1939); and Cannery Row (1945).   Unrevised proofs for Steinbeck’s The Short Reign of Pippin IV.  n.p. (NY), n.p. (Viking Press), n.d. (before March of 1957), first edition thus, spiral-bound blue paper wrappers. Softcover.  About fine condition.  See images.  # 24 of an unknown number of Author Presentation Proofs, with this copy Inscribed and Signed on the inside front cover.

“Dear Mr. Goodpasture: This small piece of innocent insanity backs up Bridey Murphy.  There is an [tale]… here somewhere.  It’s one of those things that just bursts out and astonishes the writer as much as the reader – or maybe more.  I hope you get a little laughter from it.  Yours,  John Steinbeck.”

Steinbeck’s illusion to Bridey Murphy is interesting.  The story of Bridey Murphy was first told in a series of articles by William J. Barker, published in the Denver Post in 1954.  In it, housewife Virginia Tighe, claimed to be in a past life an Irish house wife, Bridey Murphy, and under hypnosis told amazing tales of her former life.   In early 1956, Doubleday released a book: The Search for Bridey Murphy.

These unrevised galley proofs are printed on rectos only, with two publisher labels affixed to front cover. The first is numbered #24 and includes publication information.  Below it is another label with three paragraphs about the book.  Lower right corner of this is missing, effecting portions of last two lines of text.  [See illustration]. The proof has none of the preliminaries set in type nor any of the William Penn DuBois illustrations.  Not recorded by Goldstone & Payne.  A rather scare item for the Steinbeck specialist. 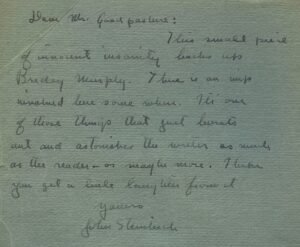