“Many thanks for your letter. I hope you and Jeff were not too disturbed by the fight – but I would not blame you if you were.  I saw some of the literature on the religious phase of the struggle and in fact I got a few anonymous letters about my having a dinner with a Protestant!!!  Holy orders is no insurance that a man won’t act like a damn fool, and that seems to have been the case with one or two of the clergy in Pittsfield who encouraged it instead of discouraging it. And I suppose they continually bewail what happened to Al Smith! Actually I have never had an experience comparable to yours from anyone and I’m sorry you did. Hope to see you soon  –   Best,  Jack.”

In 1947 Kennedy began his political career by representing his Massachusetts district in the U.S. House of Representatives. In 1953 he was elected a U.S. Senator, the same year he married Jacqueline Bouvier. Our remarkable letter mentions American reformer, politician and former four-term governor of New York, Alfred E. Smith (1873-1944) who preceded Kennedy as the first Roman Catholic nominated for the presidency by a major political party. Smith’s religion fueled fears that his loyalties would be divided between Washington and Rome and contributed to his defeat in the 1928 race. However, unlike Smith, who “had defended his church, quoting clerics and encyclical[theology]…Kennedy defended himself, and quoted his own record and views…He spoke only of legislative, not theological, issues, and he spoke only for himself.  He felt neither self-conscious nor superior about his religion but simply accepted it as part of his life,” (Kennedy, Sorensen). That did not stop critics from denouncing his faith, however, and some Catholics even thought Kennedy not vocal enough about his religion. Ultimately, Kennedy overcame these differences and won the 1960 election to become the nation’s 35th president.

This letter is in excellent condition and very rare in full holograph.  It is the first Kennedy letter to pass our desk with any kind of significant religious content clearly elucidating his religious vs. political positions! 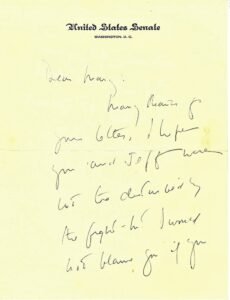 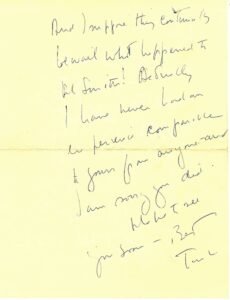