“My dear Mr. Jenks, I doubt if it would be advisable for me to comment briefly on that article of yours, when I have at length stated my position in my books, “America and the World War”, and “Fear God and Take Your Own Part”; and in my Metropolitan articles, not to speak of my recent letter to the National Security League. Sincerely yours, T. Roosevelt”

Theodore Roosevelt penned eighteen books and nearly 2000 articles on subjects ranging from travel to politics. During World War One, former President Roosevelt devoted a great deal of energy to America’s obligations regarding the international conflict.  Feeling that President Wilson’s international policy was weak, Roosevelt offered his own observations concerning the war in America and the World War. Published in 1915, the book laid out the moral and political case for American intervention in the war and examined a wide spectrum of war related issues, including the ethics of self-defense and the practical necessities of preparing for the conflict. Roosevelt followed up this successful publication with his 1916 Fear God and Take Your Own Part, a book largely made up of articles he had previously written for Metropolitan Magazine. In this collection, Roosevelt illustrated the importance of sacrifice and service for all American citizens. Making the case that citizenship was not a series of protected privileges but a group of rights with attendant obligations, Roosevelt argued that America was morally obligated to stand by their European allies on the battlefield. An interesting correspondence that highlights Roosevelt’s resolve by calling attention to two books that inspired public support for American intervention in our world’s first truly modern conflict. 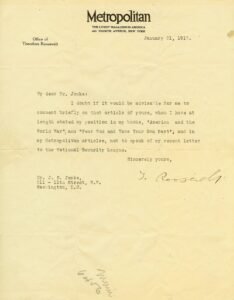