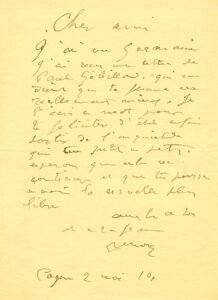 RENOIR REFERENCES RECEIVING A LETTER FROM THE NIECE OF BERTHE MORISOT AND EUGENE MANET, PAULE GOBILLARD, WHO WAS A TALENTED YET RELATIVELY UNKNOWN WOMAN ARTIST AT THE TURN OF THE 20TH CENTURY

“Dear friend, I saw Germaine. I received a letter from Paule Gobillard who told me that your wife is really doing better. I am writing to tell you that I am happy for you that you are finally relieved of the worry, which [plagued] you. Let’s hope that this will continue and that your mind will be free. In friendship for you and your wife,  Renoir”.

Paule Gobillard (1867–1946) was a French artist and Post-Impressionist painter who was heavily influenced by the Impressionists; the niece of Berthe Morisot and Eugène Manet, the brother of Édouard Manet, who taught her lessons in painting as part of her education upon being orphaned at an early age. She was unknown in the art scene compared to her relatives. She exhibited with the Société des Indépendants in 1904 and in 1926.

An attractive, relatively inexpensive and boldly penned Renoir letter, that is perfect for display.