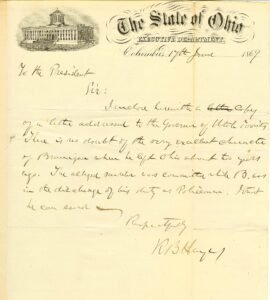 RUTHERFORD B. HAYES TO U.S. GRANT

SEEKING A REPRIEVE FOR A POLICEMAN ACCUSED OF MURDER IN UTAH

HAYES, RUTHERFORD B.  (1822-93).  Nineteenth President of the United States (1877-81);  Brevet major general in Civil War, wounded five times, most seriously at the Battle of South Mountain in 1862;  left Congress to run for Governor of Ohio and was elected to two consecutive terms, from 1868 to 1872.  Intriguing Autograph Letter Signed, “R.B. Hayes”, as Governor of Ohio, on illustrated and imprinted The State of Ohio, Executive Department letterhead.  One full page, small quarto.  Columbus, June 17, 1869.  Very fine condition.  “To the President [Ulysses S. Grant]”.  Hayes writes:

“Sir: I enclose herewith a letter copy of a letter addressed to the Governor of Utah Territory.  There is no doubt of the very excellent character of Browigson [?] when he left Ohio about two years ago.  The alleged murder was committed while B. was in the discharge of his duty as Policeman.  I trust he can [be] saved.  Respectfully, R.B. Hayes”.

Grant would have been well aware of Hayes, his fellow officer from their mutual service in the Civil War, and their involvement in the Republican Party in the years that followed.  The ease, and informality of Hayes’ letter indicates this, in the deleted word of letter, being replaced with ‘copy’, without the need of Hayes to re-start and send a ‘clean’ copy to the sitting President of the United States, as the custom of the era would have dictated.  Further, the request for leniency or clemency with the words: “I trust he can [be] saved” further speaks of an intimacy and familiarity between the two men.

Add to this that Grant’s involvement in the contested Presidential election of 1876, where Hayes was to eventually prevail over Tilden [who had receive the majority of the popular vote] and we have a letter of some significance.  Letters written to and between Presidents have always commanded great interest. We can recall no other letter between these two men appearing for sale in recent memory, or ever.  Just an absolutely choice Presidential item on multiple levels!