HANCOCK, JOHN.  (1737-1793)   President of the Continental Congress and of the Congress of the Confederation; first Governor of Massachusetts; first signer of the Declaration of Independence.  Historic, apparently unpublished, Autograph Letter Signed, “John Hancock” [with a bold paraph], as President of the Continental Congress.  One full page, quarto. Philadelphia, April 12, 1776.  To Thomas Cushing, marine commissioner, in Boston.  Extremely fine condition.  The letter reads:

“Dear Sir.  Three posts have arrived here, and not a line from you.  Yours of 23rd ultimo, by private hands, I received yesterday, am glad Mr. Avery is safe with you. money etc.  I wish to know the particular state of the ships, and everything respecting them.  You say noting about Boston.  I want to hear every little stirring.  How pray are the bells taken from the steeples[?],  I long to hear the Sound of those Bells.   Do give me particulars.  One of our vessels has sent in a cutter,  Captain Barry’s letter to me.  You will see in the enclosed papers.  We have good accounts from our little fleet at New London.

I beg to be remembered to all our friends. I send by this apportion Commissions and Instructions for Privateering to the Assembly.  Persevere in doing all the good you can.  Where stand the militia matters.   Adieu, I am greatly hurried, your humble servant, John Hancock.

Mrs. Hancock joins me in best compliments to your Lady and Family.”

In an annotation written neatly in the margin, Henry Newman, Cushing’s nephew details some of the history of this letter.  He writes:  “Mr. Avery, soon after became Secretary of State for Massachusetts.  And so continued nearly 30 years until his death June 1806.  He married this Mr. Cushing’s eldest daughter.  He was one of the most fearless, resolute, and active patriots of the day. And aided in the destruction of the tea.  Many ancedents [sic] of his daring conduct are related.  Among others: his tearing down of the Royal Flag Staff, and planting the Liberty Pole in Boston main street in defiance of British soldiers, and his ceasing of a British sentinel  by the throat when on duty and shaking him with his black stocks, in consequence of his insolence to some Ladies on the walk or public walks.”

A simply wonderful letter from our first Signer of the Declaration of Independence, while serving as  President of the Continental Congress.  Any letter with this level of content, and personal reflection, written in 1776 by a Signer of the Declaration of Independence deserves special attention.  A cornerstone of any collection of Signers of the DoI, or Americana.  One of our “Best of the Best”. ™ 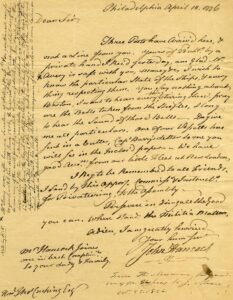