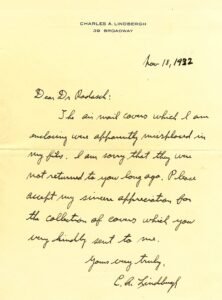 LINDBERGH RETURNS SOME AIR MAIL COVERS THAT WERE SENT TO HIM EARLIER IN 1932, THE YEAR OF THE LINDBERGH BABY KIDNAPPING AND MURDER

“The air mail covers which I am enclosing were apparently misplaced in my files.  I am sorry that they were not returned to you long ago.  Please accept my sincere appreciation for the collection of covers which you very kindly sent to me.  Yours very truly, C.A. Lindbergh”.

Charles Lindbergh and his wife, Anne, lived a nightmare in 1932.  That March, their 19-month-old first-born son was kidnapped and found murdered.  Bruno Hauptmann, arrested two years later for the crime, was tried and executed in April of 1936.  To escape the publicity of the trial, the Lindberghs moved temporarily to England in 1935, where they spent four years touring the continent and observing the machinations of European air forces.  Upon his return to the States, Lindbergh was involved with aeronautics for the remainder of his life, writing several autobiographical novels detailing his experiences.