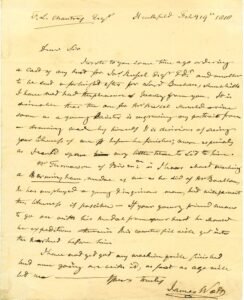 JAMES WATT ~~ PREPARES TO SIT FOR A MEDAL AND BUST TO BE MADE OF HIM, MARKING HIS ACHIEVEMENTS OF THE LAST 80 YEARS AND REFERENCES FINISHING ONE OF HIS LAST STEAM ENGINES

“Dear Sir, I wrote to you some time ago ordering a cast of my bust for James Russel Esq. and another to be sent a fortnight after for Lord Buchan, since which I have not had the pleasure of hearing from you.  It is desirable that the one for Mr. Russel should arrive soon as a young Painter is engraving my portrait from a drawing made by himself and is desirous of seeing your likeness of me before he finishes; more especially as I can’t spare my little time to sit for him.  Mr. Thomasson [sp?] of …is I hear about, [and] making a Birmingham medal of me as he did of Mr. Boulton [Watt’s partner at this time], he has employed a young and ingenious man, but will present the likeness if possible — If your young friend means to go on with his medal from your bust he should be expeditious otherwise this counterfeit will get into the market before him.  I have not yet got any machine quite finished but am going on with it as fast as age will let me.  Yours truly,  James Watt”.

A truly fine letter detailing the imagery that was to define our modern concept of Watt’s likeness, with the additional choice reference to the construction of one of his engines, in the last line of text.   The letter is written to Sir Francis Leg(g)att Chantrey RA (1781–1841), who was the leading English portrait sculptor in Regency era Britain, producing busts and statues of many notable figures of the time;  his notable works include the statues of King George IV (Trafalgar Square); King George III (Guildhall), and George Washington (Massachusetts State House). He left the Chantrey Bequest for the purchase of works of art for the nation, which was available from 1878 after the death of his widow. Simply choice associations throughout!