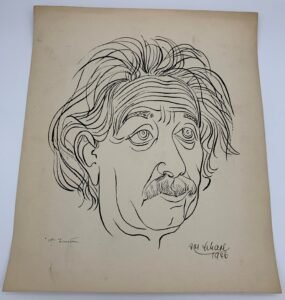 BOLDLY SIGNED BY EINSTEIN AND THE ARTIST, JOSEF SCHARL

EINSTEIN, ALBERT (1879-1955). Theoretical physicist regarded as one of the most influential scientists of all time; received the Nobel Prize in Physics in 1921. Superb silkscreen portrait of Einstein, Boldly Signed by him at lower left, “A. Einstein”, in ink. Also signed “Jos. Scharl” and dated “1946” at lower right by the artist.   [JOSEF SCHARL (1896-1954). German modern artist; Einstein sponsored Scharl’s immigration into the United States in 1939 after he was labeled a ‘degenerate’ artist by the Nazi Party; Einstein gave the eulogy at Scharl’s funeral; their association was long and close.]  One page, large folio. [approx 19 ¼ x 17 inches]  No place. 1946.  Einstein is depicted in an expressive full face, mustached, messy hair pose, that wonderfully captures the essence of Einstein. 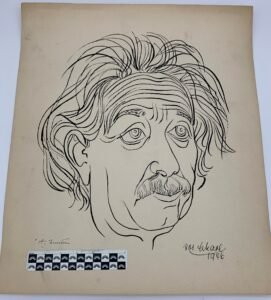 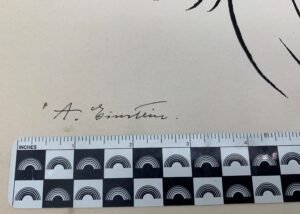