WITH [APPARENTLY] A 3 PAGE COPY OF A LETTER DREISER SENT TO PRESIDENT ROOSEVELT CONCERNING PUBLIC TRANSPORTATION AS AN EQUAL RIGHTS ISSUE!

DREISER, THEODORE. (1871-1945). American naturalist author. A ‘content overflowing’, archive of twenty Typed and Autograph Letters Signed.  Many are on Dreiser’s name-imprinted stationery, several on The American Spectator letterhead, and one letter is on a non-imprinted sheet.  All/most are large octavo/small quarto in size. October 1933 to October 1939. Each letter shows some signs of fire damage with margins cut or reduced, but the bulk of the content is there. [see images].  Examples from the archive include:

Typed Letter Signed, “Dreiser,” on his name imprinted stationary. One page, octavo. “232 S. Westmoreland Ave., Los Angeles.” “June 24, 1935.” To “Selden Rodman c/o Common Sense, 315_4th Avenue, New York, N.Y.” With a seven line postscript in Dreiser’s hand. In this important letter, Dreiser, former leader of the National Committee in Defense of Political Prisoners, a group that took testimony from coal miners in Pineville and Harlan on the violence against the miners and their unions by the coal operators, writes: ” … In the Congressional record for Monday, June 1 sth, 1938, pages 9308-309-310, you will fmd a report of an investigation commission, appointed by Governor Ruby Laffoon of Kentucky, into the Harlan County Kentucky mining conditions. It is a scathing report, and substantiates fully the attack I made in 1931 and 1932 … I would like to see it re-published in Common Sense … it handles conditions there, without gloves, and makes very forceful reading. If you want to use my name in connections with it, I wish you would, because nothing has been changed, and will not be changed without more pressure than Gov. Laffoon is likely to apply …. “

In the Harlan mine case, Dreiser, along with noted authors John Dos Passos and Sherwood Anderson, worked as members of the NCDPP to expose the horrible conditions faced by coal miners in this region of Kentucky. Facing growing hostility towards the NCDPP by the mine owners, Dreiser was forced to flee the state or risk being charged with criminal syndicalism and morality charges, although he continued to champion the miners’ cause from outside the state.

” … FLIES AND LOCUSTS was contributed to Walter Winchell’s column, substituting for him one day. I came out with errors which were to have been corrected in proof, but were never made. In this version, I have perfected the text, and added one or two ideas and I would like to see it used in this form, because I am satisfied from things I have heard that while it was published in the New York DAILY MIRROR, it was rejected by most of the papers that take his column. My sole purpose in putting it in the MIRROR was, of course, to get for it the very wide circulation which he has. I think it is particularly valuable for a paper like COMMON SENSE … ”      .

Typed Letter Signed, “Theodore Dreiser,” on his name imprinted stationary. One page, octavo. “Mount Kisco, New York.” ‘January 21,1936.” To Mr. Selden Rodman, one of the editors of the socialist leaning Common Sense magazine: ” … I would like very much to come to the Common Sense Banquet on January 31 st, but I really don’t think I could speak, especially on ”What I would do if I were President.” The place would probably explode… “

You muse’nt [sic] think I’m at all disturbed by the publication of the letters. They aught to ….        In the first place all Jews are not com[plete] asses or hams. There are…minded well as shrewd people among them and…get the … The worse letters come from … whose frivolity … that they are the ch[osen] people. – that in  some way the Jewish race … well as its cause is sacred. Others rac[es] + nations can damned well take care of [them]selves but the Jews must now be nurture[ed] by the world. Since when? Well, the argument is on and I … take care of myself.  I always have. Just .. same your letter is an extreme … to me. and by the way the fine favor… Please write the … general replys may be the … service of Jewish letters. For and … Affectionately Dreiser.”

Typed Letter Signed, “Theodore Dreiser,” on his name imprinted stationary. One page, octavo. “4922 Rosewood Avenue, Los Angeles.” “September 6, 1935.” To “Mr. Selden Rodman, c/o Common Sense, 315- Fourth Ave., New York, New York.” Dreiser writes to express his hope in a widening acceptance of communism in the United States: ” … Now that the communists have been instructed to work with reform organizations in general in this country it seems to me that Common Sense should do better; particularly if some of their chief exponents could be induced to express themselves through your pages. Why not? “

The carbon of Dreiser’s letter to “Mr. Roosevelt” – which is obviously F.D.R, by both character and content is most intriguing.  We quote only the first 3 paragraphs of what amounts to a political manifesto. The addressing of the President as “Mr”, is most revealing.  It reads, in part:

To me, cheap transportation, in any form of social organization, particularly any democratic form of social organization, – that is safe, inexpensive and respectable transportation for men, animals, food, etc. ranks in social —  that mental and physica1 importance – with the modern democratic privileges of free speech, free assembly, free education, a secret and protected ballot, equality before the law, the Right of trial by jury of one’s peers, a free press and other democratic guarantees

Travel is not only a necessity but enlightened and so liberalizing – contributing enormously, as does most change of’ scene and social contact, to the health and happiness of’ all.  The advantage of a Secretary of Transportation over a Transportation Board of two or more persons lies in the centralization of responsibility in a single individual whose character and qualifications for the work in hand are much more easily so studied before, as well as after, the honor he’s been assigned to him.  For involving the necessity as well as the possibility of an enormous public service, such a position merits and will include the probability of great personal distinction, whereas a Board of’ Commission eliminates any such clear public inspection and reward….”

Throughout his life, Dreiser was a committed socialist writing several non-fiction books on political issues. Although his criticism of capitalism and a future world order with a strong American military dictate made him unpopular within the official circles, he remained a constant advocate for the working class.  This is a remarkable grouping that deserves further study.  for a full description, more images, and more transcripts just contact us.     mail@gajs.com 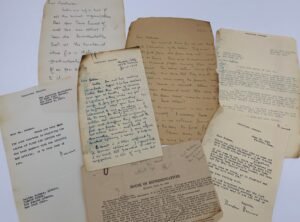 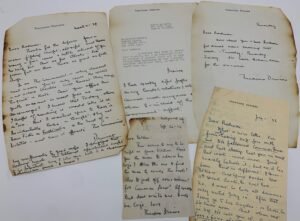