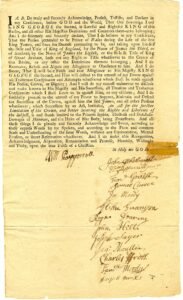 MANY OF WHOM WERE ASSOCIATED WITH THE SEIGE OF LOUISBOURG, THE PIVOTAL OPERATION OF THE FRENCH AND INDIAN WAR IN 1758, THAT ENDED THE FRENCH COLONIAL ERA IN ATLANTIC CANADA AND LED TO THE SUBSEQUENT BRITISH CAMPAIGN TO CAPTURE QUEBEC IN 1759

COLONEL JEREMIAH MOULTON, Associate Justice and militia officer who commanded a regiment at the siege of Louisbourg;

REV. SAMUEL MOODY, Associate Justice and chaplain with the troops on the Louisburg Expedition;

The text, with its original spellings [f’s for modern-day s’s, etc] reads:

I A.B. Do truly and sincerely Acknowledge, Profefs, Testifie, and Declare in my confsience, before GOD and the World, that Our Sovereign Lord KING GEORGE the Second. Is Lawful and Rightful KING of this Realm, and all other His Majesties Dominions and Countries there-unto belonging; And I do folemely and fincerely declare, That I Do believein my Conscience, That the Person pretended to be the Prince of Wales during the life of the late King James, and since his decease pretending to be, and taking upon himself the Stile and Title of King of England, by the Name of James the Third, or Of Scoland, by the Name of James the Eighth, ot the Stile & Title of King of Great Britain, hath not any Right or Title whatfoever to the Crown of this Realm, or and other the Dominions there-to belonging; And I do Renounce, Refufe and Abjure any Allegiance or Obedience to him.  And I do Swear, That I will bear Faith and true Allegiance to his Majefty KING GEORGE the Second, and Him will defend to the utmost of m Power against all Traiterous Conspiracies and Attempts whatfoever which fhall be made against His Perfon, Crown, or Dignity ; And I will do my utmoft endeavour to difclofe Confpiracies which I ffhall knw to be against him the fais James, and all other Perfons whatfover ; which Succeffion by and Act, Intitled, An Act for the Further Limitation of th Crown, and better Securing the Rights and Liverties of the Subject, is and ftands limited to the Princefs Sophia, Electrefs and Dutchefs-Dowager of Hanover, and the Heirs of Her Body, being Proteftants.  And all these things I do plainly and fincerely Acknowledge and Swear, according to thefe exprefs Words by me Spoken, and according to the Plain and common Senfe and Understanding of the fave Words, without and Equivocation, Mental Evafion, or fecret Refervation whatfoever.  And I do make the Recognition, Acknowledgement, Abjuration, Renuncition and Promife, Heartily, Willingly and Truly, upon the true Faith of a Christian.   So Help me G O D.”

Sir William Pepperrell, 1st Baronet, (1696-1759) organized, financed, and led the expedition as Commander of provincial forces involved in the British capture of Louisbourg on Cape Breton Island in 1745 during King George’s War. The Siege of Louisbourg, was the pivotal operation of the French and Indian War (1758), that ended the French colonial era in Atlantic Canada, and led to the subsequent British campaign to capture Quebec in 1759;  Pepperell also served as acting Governor of Massachusetts and Lt. General in the British Army; became the wealthiest man in New England.  In 1730, Governor Belcher, amidst great controversy, appointed William Pepperrell, Jr. Chief Justice and Samuel Came, Timothy Gerrish, and Joseph Moody associates in the Court of Common Pleas.