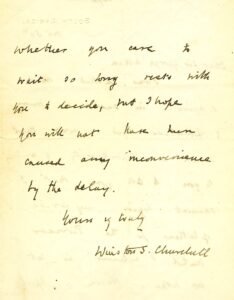 CHURCHILL WRITING AT A PIVITAL POINT IN HIS REMARKABLE LIFE’S STORY ~~  GIVING NOTICE TO SIR GEORGE ALLEN, PUBLISHER OF ‘THE PIONEER’, INDIA’S ENGLISH DAILY NEWSPAPER, —  OF HIS ARRIVAL IN SOUTH AFRICA,  TO COVER THE BOER WAR AS A NEWSPAPER CORRESPONDENT – SAYING:  “I WAS PACKED OFF TO S. AFRICA IN SUCH A HURRY TO CHRONICLE THIS WAR”

NOT KNOWING THAT JUST A MEAR TWO WEEKS LATER, HE WAS TO BE CAPTURED, WHEN HIS ARMOURED TRAIN WAS AMBUSHED BY THE BOERS.  HIS SUBSEQUENT DARING ESCAPE,  MADE HEADLINES THE WORLD OVER, AND SERVED AS THE LAUCHING PAD FOR HIS REMARKABLE POLITICAL CAREER

“I was packed off to S[outh] Africa in such a hurry to chronicle this war, that I had no opportunity of writing to you to tell you that I cannot begin my series of letters for the Pioneer until I return in – let us hope – March or April. Whether you care to wait so long rests with you to decide, but I hope you will not have been caused any inconvenience by the delay. Yours very truly,  Winston S. Churchill.”

Two weeks after this letter was penned, [15th November] Churchill was on an armored train that was ambushed at Chieveley by the Boers.  He was captured and imprisoned in a Prisoner of War camp, spending the next month and his 25th birthday there.  With ingenuity, he jumped the wall and managed to escape. [He even had the brashness to leave a note on his pillow for the Boer Under-Secretary of War, thanking him for his treatment while interred!]  A treacherous adventure to keep his freedom followed, but Churchill made it to Delagoa Bay and was hailed as a hero in England.  This escape assured Churchill of a political future.   Churchill then joined the army under General Buller’s army and marched to relieve the British at the Siege of Ladysmith and take Pretoria. He later published a volume on his experiences during the war in South Africa.

This letter is a remarkable survivor from this early period in Churchill’s life, documenting what is arguably Churchill’s launch pad event into the history books and is a ‘must have’ for the Churchill specialist or those wanting: One of our “Best of the Best”.™