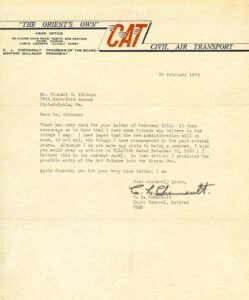 GENERAL CHENNAULT,  OF “FLYING TIGERS” FAME,  WRITING FROM TAIWAN, RECALLS HIS PREDICTIONS ABOUT RED CHINESE INVOLVEMENT IN THE KOREAN WAR

“Dear Mr. Gibbons: Thank you very much for your letter of February 16th.  It does encourage me to know that I have some friends who believe in the things I say.  I have hopes that the new Administration will do some, if not all, the things I have recommended in the past several years.  Although I do not make any claim to being a prophet, I wish you would read my article in Colliers dated November 18, 1950 (I believe this is the correct date).  In that article I predicted the possible entry of the Red Chinese into the Korean War.

Again thanking you for your very nice letter, I am Most sincerely yours, C.L. Chennault, Major General, Retired, U.S.A.F.”

Just a fine letter from the commander of the “Flying Tigers”,  who was widely viewed in China as a war hero who had protected the Chinese people from Japanese bombing raids prior to the formal entry of the US in WWII.