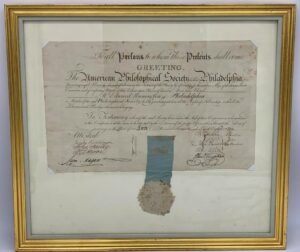 AS PRESIDENT OF THE AMERICAN PHILOSOPHICAL SOCIETY

OVERSEES THE INDUCTION OF EDWARD PENNINGTON,  A LEADING PHILADELPHIA QUAKER MERCHANT, WHO WILL FIND HIMSELF HELD PRISONER DURING THE REVOLUTION FOR HIS REFUSAL TO SUPPORT THE WAR AGAINST BRITAIN

“To all persons to whom these presents shall come, Greeting. The American Philosophical Society held at Philadelphia for promoting useful Knowledge, desirous of advancing the Interest of the Society by associating to themselves Men of distinguished Eminence, and of conferring Marks of their Esteem upon Persons of literary Merit, have Elected Mr. Edward Pennington of Philadelphia a Member of the said Philosophical Society, hereby granting unto him all the Rights of Fellowship, with all the Liberties and Privileges thereunto belonging. In Testimony whereof the said Society have caused the seal of their Cooptation to be annexed to this certificate and the same to be attested by the Names of the proper Officers this Twentieth Day of January in the Year of our Lord One Thousand Seven Hundred and Eighty.   B. Franklin, President,  John Ewing, Vice President,  James Vaughan,  James Hutchison,  John Foulke,  R. Patterson,  Sam. Hagan.”

The recipient of this induction certificate, Edward Pennington  (1726-1797) travelled to Philadelphia as a young man, and quickly grew to become one of the leading merchants in the city. Prior to the Revolution, he also was a signer of provincial paper money, served as a justice of the Court of Common Pleas, a member of the Pennsylvania Assembly, and was associated with a number of scientific organizations.

With the war, Pennington’s future changed greatly. Although he attended the Provincial Conference of May 1774 and served as a delegate to the Provincial Conventions, questions began to arise about Pennington’s loyalty to his fellow colonists. Following his refusal to sanction war with Britain, Pennington was held under arrest and was sent, along with a number of fellow Quakers who also opposed war, to Virginia under armed guard for eight months. Despite this difficult ordeal, Pennington was subsequently elected a member of the Common Council and oversaw the distribution of funds to French refugees residing in Philadelphia.

Some light toning. Minor staining affects Franklin’s signature along with the signatures of Ewing, White, and Vaughan. Thick, blue fabric [silk] ribbon with intact, blind embossed American Philosophical Society seal affixed at lower center of document. Beautifully archival matted, and framed. These documents are quite scarce, and are grossly more impressive with their colorful silk ribbon and embossed seal, than the common land grants signed by Franklin.  Combine this with the story of Pennington’s Quaker beliefs and incarceration, and you have a winning document that is perfect for presentation and display for the serious collector of science autographs, or Signers of the Declaration of Independence. 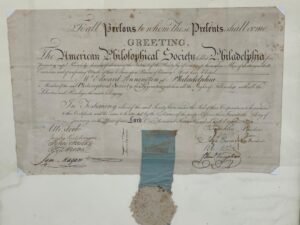 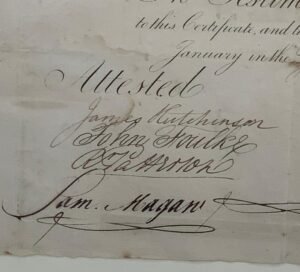 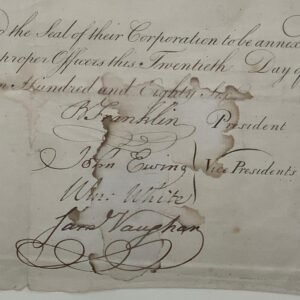