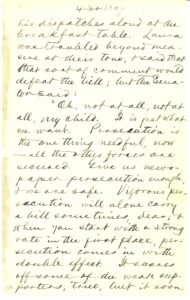 “…his dispatches aloud at the breakfast table.  Laura was troubled beyond measure at their tone, and said that that sort of comment would defeat the bill, but the Senator said: ‘Oh, not at all, not at all, my child.  It is just what we want.  Persecution is the one thing needful, no all the other forces are secured.  Give us newspaper persecution enough, and we are safe.  Vigorous persecution will alone carry a bill sometimes, dear; and when you start with a strong vote in the first place, persecution comes in with double effect.  It scares off some of the weak supporters, true, but it soon…’

The Gilded Age, the only novel that Mark Twain ever wrote with a collaborator, drew upon Twain’s Missouri boyhood and the recollections of the American essayist, novelist, and Hartford Courant publisher, Charles Dudley Warner. Begun following a February 1873 dinner-table challenge, the book was finished in just over a year and sold over forty thousand copies within months of its release. A critical examination of political corruption, big business, and the American obsession with getting rich, three dominant aspects of nineteenth century America, The Gilded Age quickly became identified with the widely praised satirical style of Mark Twain. A full page of the final manuscript draft from Part five, chapter forty-three of the Gilded Age penned by the American icon William Faulkner hailed as “the first truly American writer.”