THE BEGINNING OF:  “THE TRAIL OF TEARS”

A REMARKABLE TESTAMENT FROM PRESIDENT ANDREW JACKSON APPROVING THE SALE OF CREEK INDIAN LAND TO A NOTORIOUS SPECULATOR, KNOWN FOR HIS SWINDLING NATIVE AMERICAN’S OUT OF THEIR LANDS

JACKSON, ANDREW. (1767-1845) 7th President of the United States; led troops during the ‘Creek War’ of 1813-14, winning the ‘Battle of Horseshoe Bend’ and subsequently enforcing the ‘Treaty of Fort Jackson’ which required the Creek surrender of vast lands in present day Georgia and Alabama; won the ‘Battle of New Orleans’ against the British in 1815; and led U.S. forces in the First Seminole War, which led to the annexation of Florida.  Exceedingly-rare, “Creek Nation of Indiana in the State of Alabama” headed Partly-printed Document, Boldly Signed, “Approved May 30th 1834 / Andrew Jackson”.  The initial document starts on February 19, 1834, in which, Hillabee Harjo, [A Creek Indian] agreed to sell his land to Daniel McDougald.  Macon County Alabama, and Washington D.C.  Four pages, total, legal folio.

The land referenced in this document made up one-half of Section 36 in Township 10, in Macon County, Alabama, and to which Harjo has signed his name with an “X”, and two witnesses have attested to the veracity of Harjo’s signature.   The sales price was $400 and the document states that the transaction was subject to the President’s approval. Two days later McDougald signed the sales agreement, and on March 8, the Indian Agent gave his consent. On May 30, 1834, the document reached President Jackson’s desk and he wrote “Approved” and signed it, in full, with a huge signature measuring over 6 inches!

Before 1830 the Cherokee, Chickasaw, Choctaw, Creek, and Seminole tribes [sometimes collectively referred to as: The Five Civilized Tribes] were living as autonomous nations in the American South. The process of cultural transformation was gaining ground, and many people felt they would be integrated in into American life. However, strong forces did not want culturalization.  They wanted the resources inherent in the Indians’ land, and wanted the Native Americans to be removed altogether.

President Jackson was one of these individuals, and after making an unsuccessful effort to get the Indians to leave their ancestral lands voluntarily, he secured passage by Congress of the ‘Indian Removal Act’. This gave the President the power to negotiate removal treaties with Indian tribes “living east of the Mississippi”.  Under the terms of these treaties, the Indians were to give up their lands in exchange for lands in the West. The removal was supposed to be voluntary, but when Native American nations resisted, Jackson forced them to leave, often under horrendous conditions, and hence this episode became known as:  The Trail of Tears.

In the ‘Treaty of Washington’ that was signed on March 24, 1832, the Creek Indians ceded to the United States all of their ancestral lands east of the Mississippi River to the Government. The treaty also provided that the Creeks would be allocated portions of the land they were giving up and allowed five years to sell it.  It stated. “The United States engage to survey the said land … to allow ninety principal Chiefs of the Creek tribe to select one section each, and every other head of a Creek family to select one half section each, which tracts shall be reserved from sale for their use for the term of five years, unless sooner disposed of by them … These tracts may be conveyed by the persons selecting the same, to any other persons for a fair consideration, in such manner as the President may direct.”  It specified that the sales “shall not be valid until the President approves the same.” Thus, if a Creek found a buyer for his land, President Jackson himself would have to approve the final transaction. Pursuant to this treaty, in 1833 a census was taken of Creek heads of families who were entitled to tracts of land. It reveals that a number of them had the family name of Harjo, including some Creek Chiefs.

That is not quite the end of the story behind this document. The government may have interposed itself into the transaction, but it did not protect the lndians from speculators, who quickly cheated them out of land and cash.

McDougald was a notorious speculator whose name and actions appear in the book, “Alleged Frauds on Creek Indians.” This book relates McDougald and his cohorts admitted that they had stolen the land in 170 transactions with the Native Americans, and paid in just 40.  Harjo probably never saw his $400.  By 1835, the Creeks were so destitute, they begun stealing livestock and crops from white settlers. In 1836, the Secretary of War ordered the removal of the Creek “as a military necessity“.  By 1837, approximately 15,000 Creeks had been forced to migrate West.

It has been about three decades since the last similar document reached the marketplace by our research.  A remarkable testament from “The Beginning of the Trail of Tears”.  Simply one of our “Best of the Best” ™ 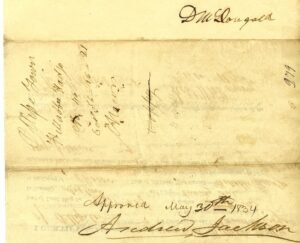