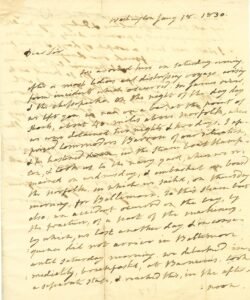 “Dear Sir, we arrived here on Saturday morning, after a most tedious and distressing voyage, arising from incidents which occurred in James River, and the Chesapeake on the night of the day we left you, we ran on a bar, at the point of …, about 40 miles above Norfolk, where we were detained two nights and two days.  I apprised Commodore Barron of our situation, and he hastened, in the steam boat Hampton, and took us to the Navy yard, where we remained on Wednesday, and embarked on board the Norfolk, in which we sailed, on Thursday morning, for Baltimore.  In this steam boat also, an accident occurred on the way, by the fracture of a part of the machinery by which we lost another day, and in consequence did not arrive in Baltimore until Saturday morning.  We debarked immediately, breakfasted at Barnum’s, took a separate stage and reached this in the afternoon.  I am happy to inform you that notwithstanding all those difficulties and delays, my health has improved, and promises daily to improve.  I shall rest here a couple of days, and then proceed home.  We found our daughter Miss Gouverneur here, and likewise Captain James Monroe waiting for us.  Be so kind as to inform Dr. Watson, of the above, and all my other friends in Richmond, whom you meet with.  For your kindness, at such a distressing period of my life, my whole family, unite with me, in the most affectionate feeling and acknowledgment.  Our best regards to your sons and daughters, and best wishes for their welfare.  I shall visit you again soon.  Very sincerely your friend, James Monroe”.

This letter from James Monroe, the first U.S. President to travel aboard a steamship, offers interesting insight into the myriad of problems these vessels faced as they came to prominence on America’s rivers. During the first half of the nineteenth century, these crafts, despite difficulties like those related in our letter, came to dominate trade and travel on U.S. waterways. Due in large part to the increased ease of travel facilitated by the steamboat, the nation doubled in size during this historic period of technological advancement.

Monroe’s savior aboard the Hampton, Commodore Barron, (1769-1851) was the commanding officer of the USS Chesapeake during the Chesapeake-Leopard affair, a U.S./British maritime conflict that preceded the War of 1812. Court-martialed for surrendering to the more powerful British Leopard, Barron returned to active duty only after the War of 1812. Serving as commander of the Navy Yard at Philadelphia, Barron was the highest ranking officer in the U.S. Navy by the time of his death. Moreover, the recipient of our letter, Robert Stanard, (1781-1846) was a member of the Virginia State Convention of 1829-30 and served in the Virginia Court of Appeals from 1839 until his death.

In addition to these two prominent individuals, our letter also notes Monroe’s daughter, Maria Hester Monroe Gouverneur, with whom Monroe spent the remainder of his life following the death of his wife, Elizabeth, in September of 1830.

An outstanding letter, that retains its original free-franking signature, [rarely encountered in today’s market, as most were removed from the integral letter, for the individual value the franking-signature represents] and which relates wonderfully, the trials and tribulations of our 5th President in his retirement years traveling the country he helped create.   Just choice!